OK I have had a chance to look at the 2NL data.

This month has been a bit odd. Normally, the 2NLs went out within a few hours and the CEAC data was updated later that day or even the following day. This month a number of people got their 2NLs on Friday morning. Then the process seemed to stop within a couple of hours of starting. I was watching the CEAC site and at around midnight KCC time the system was updated with the 2NL data – despite the fact that many 2NLs had still not been sent or received. I think there must have been some technical issue that delayed the sending of the 2NLs. The CEAC update shows that all the interviews are booked. Incidentally – anyone can check their case on the CEAC site and if they see the in Transit status that is a clear indication that the interview is booked. I expect the remainder of the 2NLs to be sent on Monday.

This delay has reduced the information available to me. I cannot get a sense by the normal feedback of where KCC have got to in terms of DS260 submission date. So – I am basing my analysis on comments received over the last couple of weeks and what I can assume from the data.

So – how about progress this month. Well – here are the approximate number of cases scheduled for interview by region over the last three months. 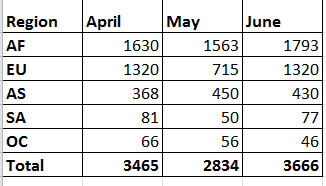 So – they have sent a good number of 2NLs out – the best over the last three months. I am an optimistic person so I am going to assume the at least the same and a bit more, so I am working on the following number of interviews for July.

AS shows almost no cases taken by backlog, and very few for OC. Selectees in those regions submitted early. SA has some, and both EU and AF show quite a number of the interviews went to backlog cases. Whilst I am guessing good progress has been made, with the DS260 processing time, there is still a 2+ month time needed for processing. That means that cases submitted in late January, February, and perhaps March will be in the July interviews. So – some interviews will continue to go to backlog cases in July and that scenario will carry on to the end. I think AF is particularly likely to continue being affected by backlog cases (moreso than EU).

Given the backlog comments below I am predicting slight increases for the above response rates so have based my calculations on the following numbers:-

So, now we have everything we need to estimate. The basic premise of this method of estimation is to assume that KCC are scheduling the appropriate number of interviews to achieve the pace they need to achieve on a monthly bases. We can therefore predict the number of interviews they will schedule next month. So – if we know how many interviews they will schedule, and we know the response rate, we can determine how many cases they need to activate by increasing the VB number. Backlog cases make this a bit more complicated than that – we have to make an assumption about how many cases will go to backlog and how many new cases are needed. That introduces an element of inaccuracy into the predictions, hence I publish a range of CNs.

Once we know how many cases KCC need to make current in order to yield the number of interviews they need, we can look ahead in the file to see what case numbers are likely to be revealed. For that reason I have published COMPLETE files this month – showing every case in the CEAC system (bar a handful of cases that error out). This means we could even apply this method of prediction to get final numbers, but given that we still have 5 full months of processing (only 3 VBs including the one I am predicting now) it seems a lot could happen between now and then. However, you are free to apply the principle and see what you think…

So – my predictions  for the next VB (July interviews) are as follows.

Just a note about Nepal and Asia. The awful news about the earthquake is still too fresh to know how that will affect the lottery. The people of Nepal need and deserve our best positive thoughts and prayers. So over the coming days we will see what impact if any this will have on interviews in Nepal. Early indications is that the US embassy itself is operating normally after the earthquake as they are posting information about the quake.