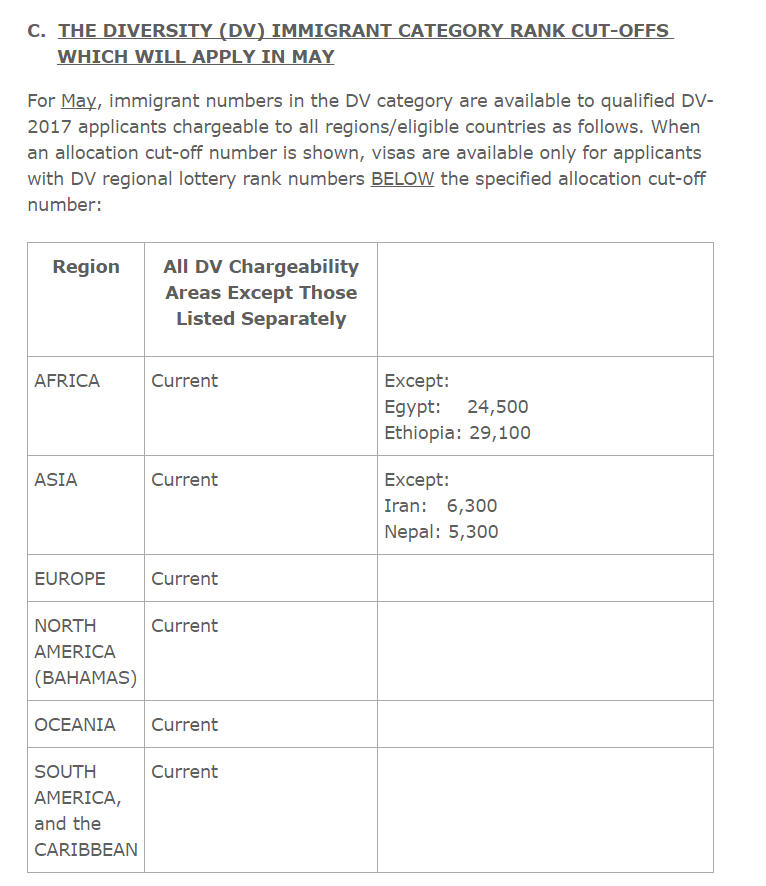 The “April” visa bulletin has been published. It concerns the case numbers eligible for May interviews. As you can see above all regions have gone current EXCEPT for the four countries identified (see below). It’s a big (and very welcome) surprise to see current so early in the year. What current means is that KCC have determined that there are enough visa slots to satisfy remaining demand for visas. So – all cases are “ready” for interviews (apart from those 4 countries listed individually).

This is particularly good news for the high numbers in SA region, as I was fearing there would not be enough visas for the demand in that region. Essentially it must mean that there has been a low response rate for the 2nd draw cases, particularly in that region. For other regions there may have been low response from the second draw (which would make sense as some people would not have checked).  There is also a chance that the EO is having some impact also. If KCC believe they will have a lot of rescheduling work to do later (when the ban is lifted), they probably want to do as much as possible earlier in the year, so that later months will be about clearing up the cases from the 6 impacted countries. That seems like a wise precaution. Well done KCC!

It is possible that some people will be current for May interviews, but will not be scheduled in May because they submitted late, or there is a processing backlog that causes a delay. April  interviews were based mainly on cases submitted up to early October.