Cautionary tale about healthcare costs in the USA

You will be aware that healthcare costs are high in the USA. I have explained that a number of times including this post on health insurance which has some useful explanations.

However, you may not believe me when I say some of theses numbers so I have decided to explain a recent health issue that we went through with Mrs BritSimon. I’ll explain, what happened, what insurance we have and then show some pictures of the bills that are rolling in. All this in an attempt to show you how important it is to get good coverage and also understand the eye watering costs that could come from a simple healthcare issue.

So a few weeks ago my wife woke up with a severe case of vertigo. That is a feeling of dizziness, a problem often caused by an ear infection or other issue affecting the balance. My wife was unable to stand at all. Our house has three levels so two flights of stairs.

In the UK, I would have called the doctor, the doctor would have come to the house, or if needed an ambulance would have been sent and trained paramedics would have treated her in the house or safely removed her down the stairs. But this is the USA, and whilst you would think healthcare would be the best in the world (because they pay more than any country in the world per capita for healthcare), here is what happened.

I called the doctor and asked what I should do. My doctor could not treat that sort of condition so advised me to get Mrs B to an emergency room. I had to pick her up and carry her down the stairs and put her in my car. I’m 51 years old and thankfully she only weighs about 130 pounds!

Once at the emergency room we were sent to a private room. Getting seen was relatively quick – in the UK a similar unscheduled visit to an ER would have resulted in a wait of an hour or two.  However, once in the ER room we did wait. We waited to see doctors, we waited for tests, we waited for a scan. In the end we were there around 5 hours, maybe 6. NHS in England would have ended up about the same. The range of available tests in the UK would have been the same. The diagnosis was inconclusive but they at least ruled out scary things like a stroke etc. During the visit she was given a drug (sedative) to relax her (a common treatment for vertigo).

OK – so about my insurance. I get cover through my employer, and my plan is considered very good coverage. As you can see below, my healthcare benefits about $22,000 a year to cover myself, my wife and my daughter for health, dental, and vision. I pay $3800 through a deduction in my salary, the company pays a little over $18,000 a year. Expensive huh. However, that does not mean I get no bills in the event of needing treatment. I was expecting bills – and they have just started arriving. 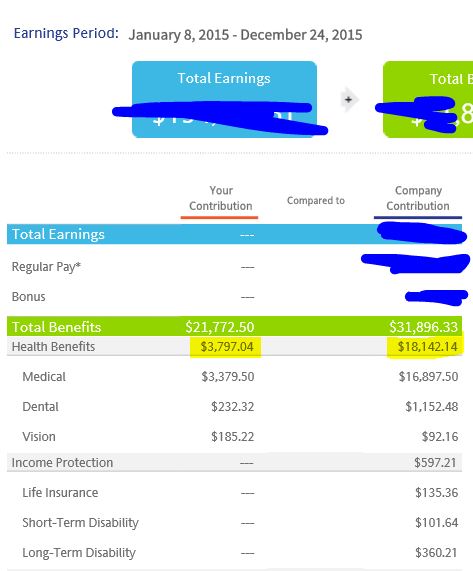 I have already received a couple of small bills where I have to pay $200/300. Those were bills for minor services while at the ER.  Then today I got the bill for the emergency room treatment. As you can see the cost for a few hours in an ER for a minor issue is over $22,000. I have to pay $1100 of that as well as the other few hundred dollars I already mentioned. 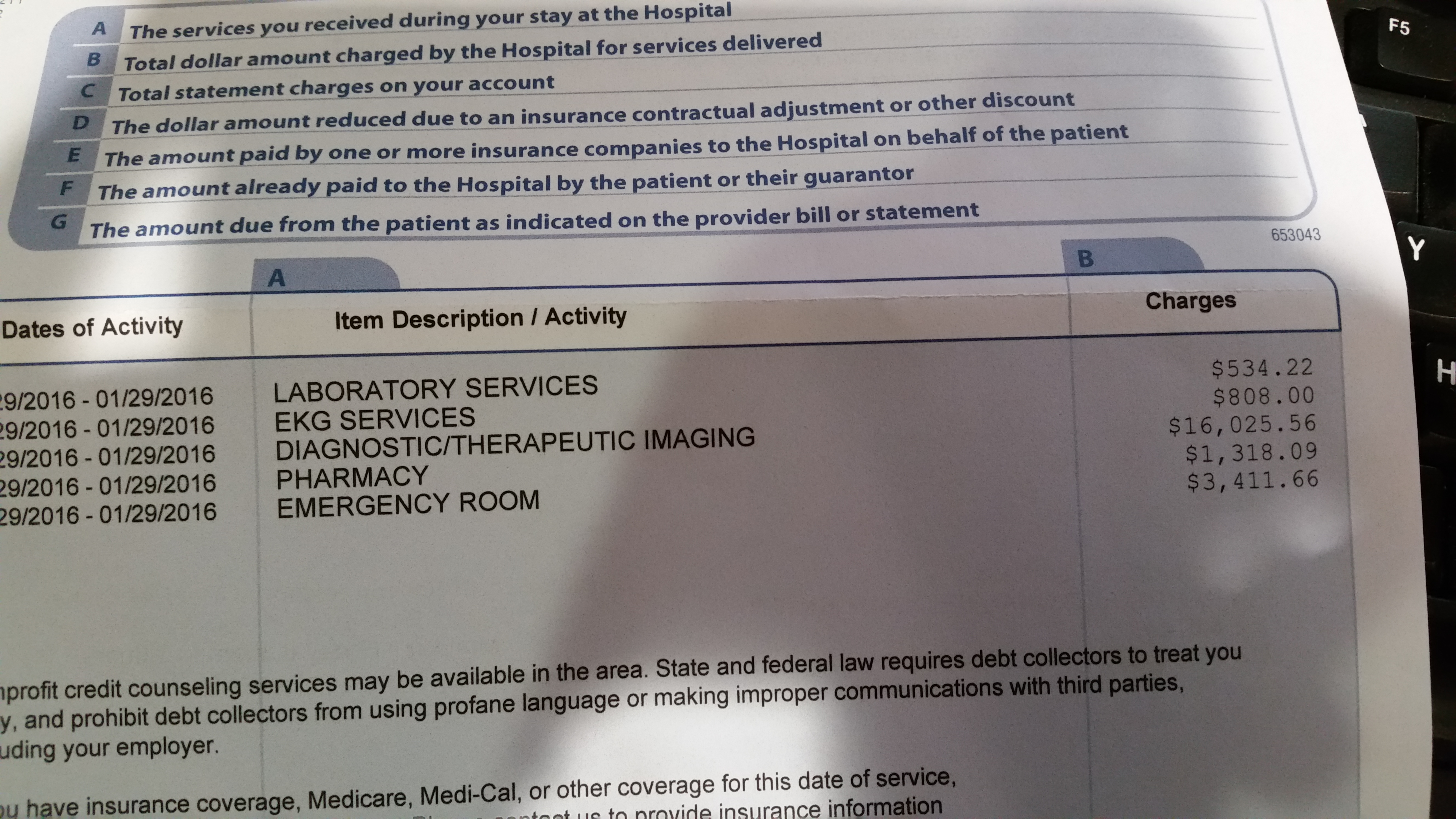 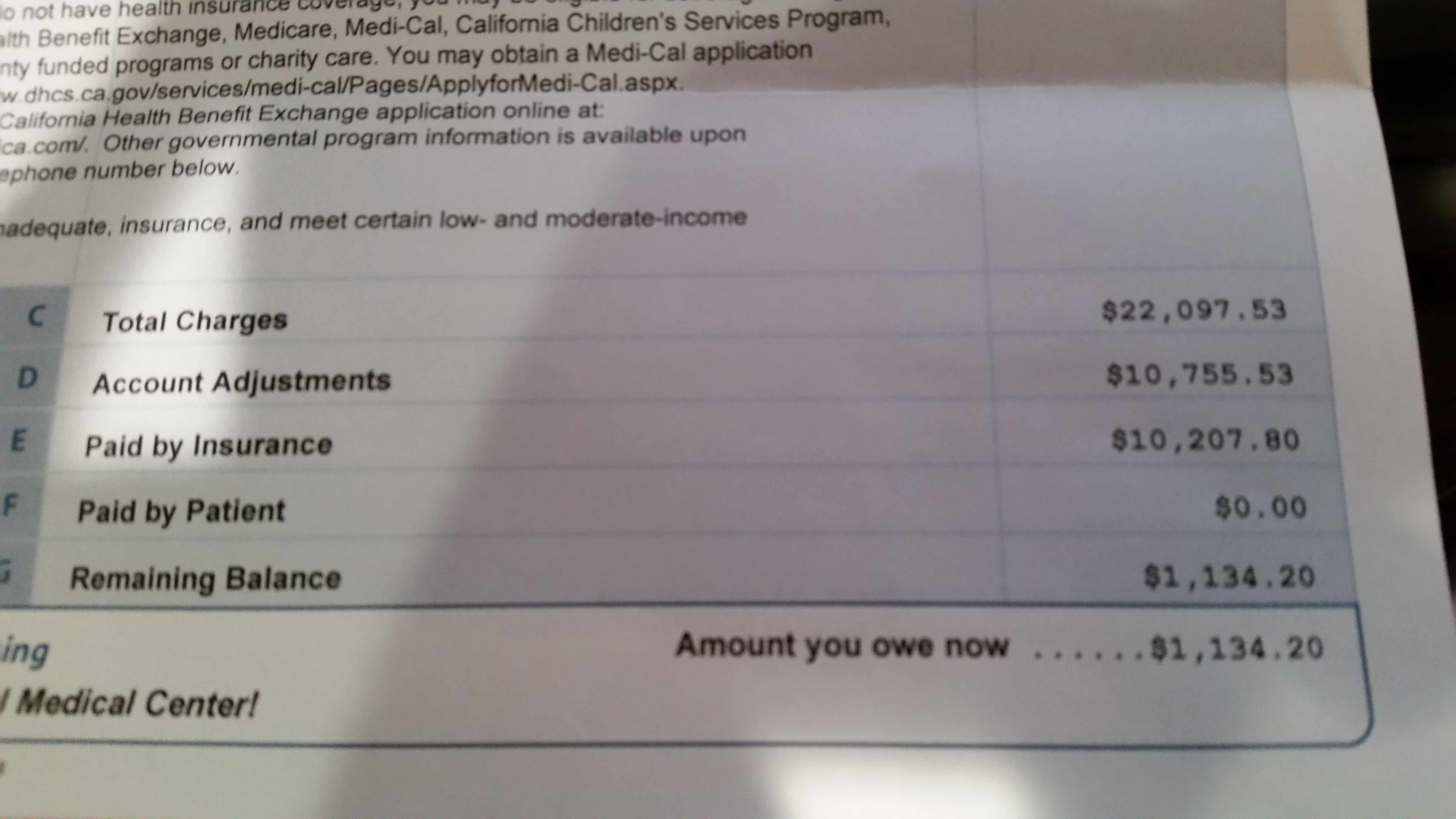 So please understand. You do not want to under estimate the cost of healthcare. Do not be without insurance.  If you have some savings, it can quickly be wiped out by a medical bill.