At the beginning of January the CEAC data was published and although I normally will extract and publish the data monthly I wanted to show a CEAC data mid January update to confirm a couple of suppositions and see what visa issuing progress has been made thus far in January.

The original data is available here and my analysis of that data and its meaning is here.

The first thing I was looking to confirm was whether any additional cases would be loaded in addition to the 76.6k we had already seen. There does appear to be a small handful of cases not loaded in the CEAC system since the max EU case is 45006 and there is at least one selectee with a case of 455XX. There is also a reported AF90XXX case whereas the CEAC data stops at 89799. So – if cases are missing it would be likely that they would be a few cases higher than the maximum previously shown.

The other thing I was keen to see was the progress immediately before the 2NLs are released. Now that we are seeing “all” the cases, we could get an idea of the number of cases that KCC make current in each month as they scheduled new cases. In order to do that I needed an extract this weekend to catch the updates to this point as I expect 2NLs to be sent out in the early part of this week.

So – here is the summary of the current status with the beginning of the month numbers for comparison. 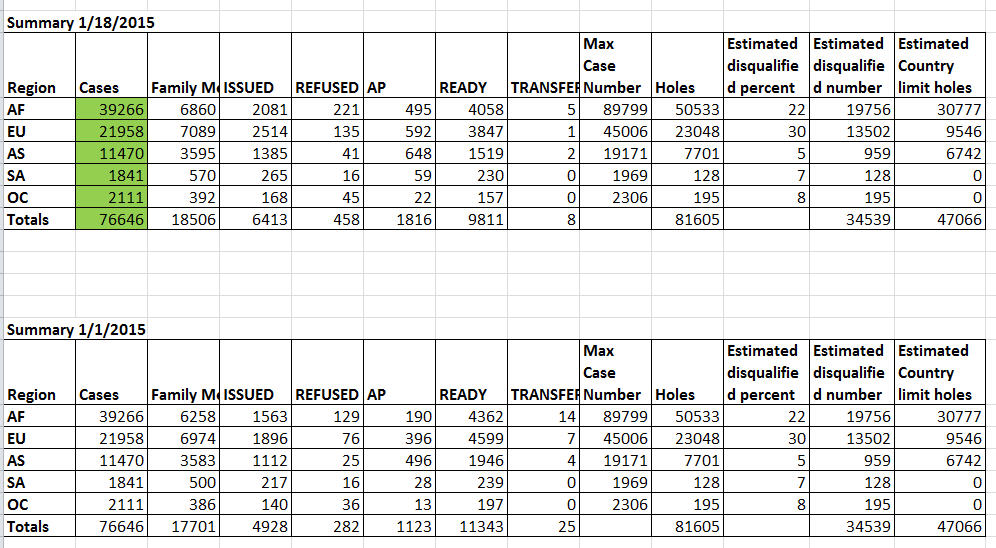 The first thing to notice is that no new cases have been loaded into the system. But – updates have taken place and the visas issued count has risen by about 1500 visas globally. I would expect that at least that many will be issued in the remainder of January – probably more.

I suspect some embassies are not yet updating the CEAC data with results – we will know a little better once we get the full month extracts at the beginning of next month.

Edit: I have realized I may have created some confusion with some additional columns I added to the data shown above. The last four columns in the summary are concerned with describing the Holes – NOT what I anticipate to happen with disqualifications of cases during processing. Because we know the highest case number and the number of cases we can accurately obtain the number of holes for a given region. For the two small regions those holes are created by disqualifications during the draw process (multiple entries and so on). However for the 3 large regions we know some of the holes are disqualifications and some are holes created because of limited countries. BY analyzing the density of each region before any country draw limits hit I was able to come up with a disqualification percentage. I then applied the percentage to the total number of holes to determine which holes were real disqualifications and which holes were limited country holes

If anyone wants to see the full data extract for  this update – it is available here.