This is another important piece of data that we need to know to predict the final numbers.

Not everyone responds to their win. Some people enter the lottery, get selected, and then for whatever reason, never submit their DS260. It could be that they did not check their win, they changed their mind, or many other reasons. The response rate can help us predict the final numbers and can also help understand the backlog. By comparing the response rate to the final response rate from last year, we can guess how many cases from those already current should have submitted their DS260 – and therefore predict how many submitted late and are the backlog.

I calculate response rate based on those cases that are current (allowing for country limits) and then excluding “at NVC” cases (which either have not completed the DS260 OR were late). That allows us to guess the backlog.

In the next few months the response rate will certainly increase toward 2015 levels – and the backlog cases will continue to take some of the interview slots in each given month. This has the effect of slowing down the VB progression. The reason for that is simple – if there are, for example, 1500 interview slots open for AF region in a given month, and 500 come from the backlog (already current cases with delayed DS260 submissions), then KCC only need to increase the VB number by enough case numbers to get 1000 more cases. 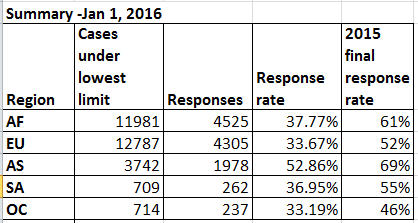 In terms of the final numbers we can use the 2015 final response rates to determine how many of the selectees will want an interview. We use the higher family rate for that (as I explained today in an earlier post on derivative rate growth).

That gives the following picture for how many selectees will want interviews. What this means is clear. Allowing for the derivative growth, and 2015 response rates, there are two regions (EU and OC) that won’t hit their quota even if every single case that responded were to be approved (which of course is a ridiculously optimistic view).

That means those two regions (OC and EU) will go current – there is no doubt in my mind (and this confirms what I have been saying for some months now).

Just a word of warning. This calculation is not perfect, it assumes people across a region will behave in the same way. It would be better to model this on each country, but for broad estimations, this method is OK.

For the remaining 3 regions we will have to take the calculation to the next step which is to estimate how many of the selectees will be approved. l will post about that later today or tomorrow.