OK – as I am writing this it is midnight here in California, 3am on the East coast of USA. That means the DV2016 results have been available for 15 hours. So far, I have not seen a single verified “selected” case. Some people have claimed success, but so far all the cases seem to be hoaxes.

So – it is feeling like something is amiss. We might be seeing another technical problem. It wouldn’t be the first in recent years.

In 2012 the selection program had some testing code left switched on that meant all the winners selected were from the first couple of days of entries. People were notified they were winner, and others were told they were not. The bug was identified, the results were cancelled and the draw was redone.

In DV2015 there was a glitch where some people saw a not selected message by mistake when they were actually winners. This was resolved within a day or so and some people have been contacted by email to suggest they checked the result again – whereupon they found they were winners.

So how about this year?

There seems to be two different cases.

1. In one case the entry is checked and almost instantly the system returns “not selected”.

2. In the other case the entry is checked and after a slightly longer period (1 to 2 seconds) the system returns a message saying “Session Timed out” as shown below:- 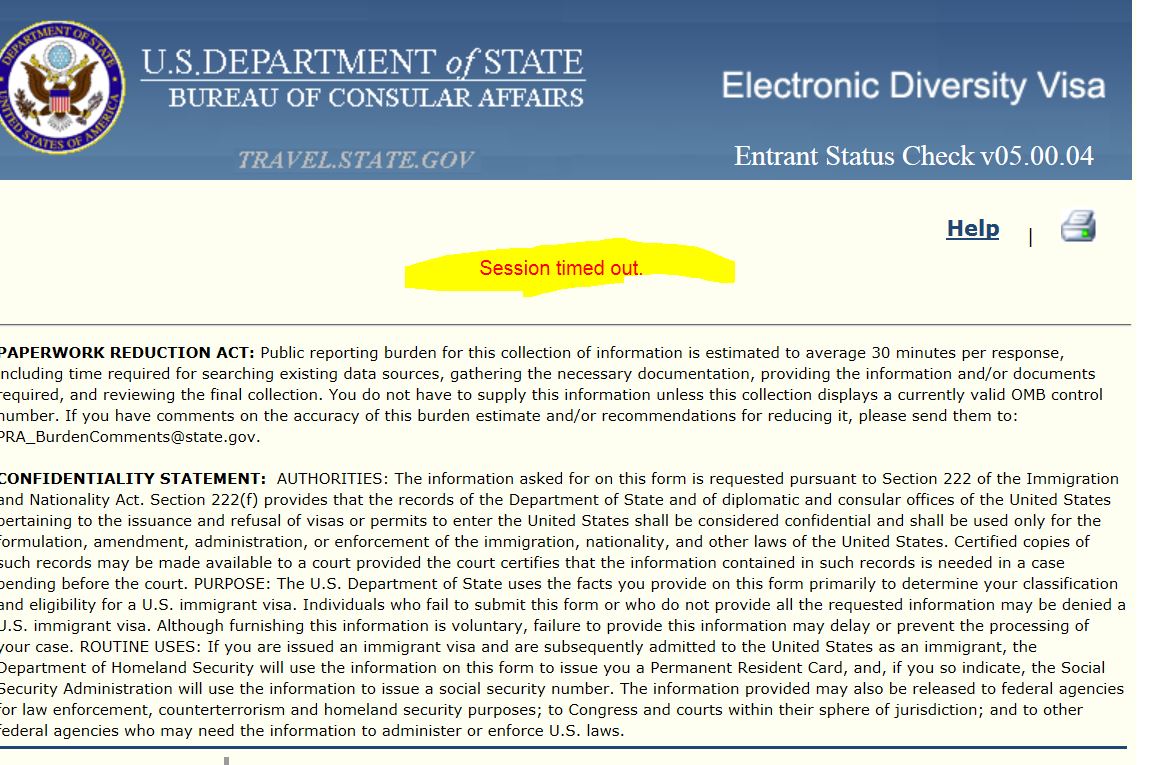 There is a consistency of this second message – some cases always get it whilst the not selected cases are just as reliable. Some people are getting messages through incorrect data input, but that is not what I am referring to.

I hate speculating BUT people may jump to various conclusions and I would rather get an explanation out to my readers, as opposed to no information.

I have details for three cases like this at the moment. I am hopeful that DoS will resolve whatever issue they are having and I have my fingers crossed for those that may be about to get some good news.

However, what we are talking about is someone who consistently enters the information and gets the session timed out error – and in my tests I can alternate between not selected cases and “interesting” cases with 100% predictability. So – that rules out network issues, browser issues, server load and so on. There is something “different” about the 3 interesting cases I have.

Check the login data against a database.

Is the case selected?

If No – easy – just put up the standard not selected message that 99% of people see.

If Yes – the system has to go and retrieve the 1NL which is a prepared letter (a “report” in IT terms).

The yes logic means an extra step would have to be made. That would require access to the letter image, or at least the data that is filled into a form (but I believe it is an image based on previous years 1NLs).

THat theory would suggest that “not selected” cases are indeed not selected – but it should be remembered that last year the glitch meant that some were told they were not selected when they were in fact selected. So – everyone should check again once this is resolved…

Hope that explains why the IT geeks are leaning a certain way… could be wrong of course – just an educated guess.