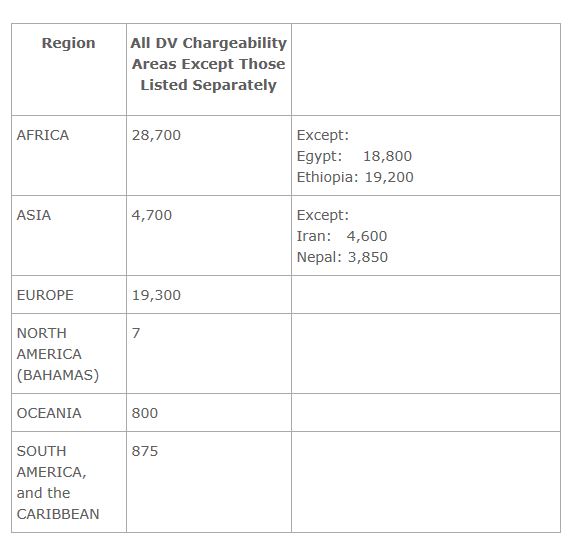 The “February” visa bulletin has been published. It concerns the case numbers eligible for March interviews.

As of this evening, the VB is published BUT is not available through the normal link – that link still says coming soon. However, the VB is available at this link.

It is possible that some people will be current for March interviews, but will not be scheduled in March because they submitted late, or there is a processing backlog that causes a delay. February interviews were based mainly on cases submitted up to late July.

WHY IS THERE NO CHANGE FOR AF AND AS REGIONS? PLEASE READ BELOW!!!!

As I have been warning for a couple of months now, the pace for a couple of regions has slowed down. AF and AS regions have not increased at all (apart from the exception countries). As I said – I predicted that. I expected it. It is nothing to panic about. It is NORMAL. Remember this is a 12 month process and these March interviews are only for month 6 out of the 12. So RELAX!!!!

So why has this happened for AS and AF regions.

In Asia, about 80% of all the cases in the first 7000/8000 case numbers are assigned to Iran and Nepal. So – whilst the region as a whole has not increased, Nepal and Iran have increased, and therefore new cases have become current. That is simple to understand. There is a good increase for Iran and Nepal. Iran will possibly have the country exception removed next month since it is roughly in line with AS region as a whole.

Africa is slightly different. Let me explain how KCC organize their work. In order to meet the regional quotas, KCC try to schedule about 2000 AF region cases per month. That means around 3500 people (including derivatives), and from those interviews, approved cases would be sufficient to meet the regional quota in less than 12 months. There is no need to go faster than that, and in order to operate at best efficiency it makes sense to spread the workload over the whole year.

OK – hopefully that is clear to you.  So then where do they get 2000 interviews from? Well, first of all they take into account how many people are already current but were waiting for their DS260’s to be processed. Next they increase the VB by enough numbers to yield the remaining cases needed to get the number of interviews they want. Since the number for last month was 28700, any number below that number was already current in previous months. BUT if someone had submitted in August, that case is only just now able to be scheduled. These are cases from the DS260 “backlog”. This month, those backlog cases (plus some for Ethiopia and Egypt) were obviously enough to fill all the interview slots with no additional increase in the AF region number.

This does NOT mean all the visas for AF region are assigned. It doesn’t mean there won’t be any more increased in subsequent months. It simply means they don’t need to increase the number this month.

Like I said – I have warned this was likely to happen. It should not be a surprise. Remember, the DV process is a test of patience.