We all know that there is a global quota of 50,000 visas available (up to 55,000 with the NACARA visas), but what has been more mysterious has been the split between the regions. Not understanding the regional split, has led many of us to make bad assumptions and estimations. I have read several times that the regional quotas will be published, but up to now have never found them anywhere, for any year.

However the split isn’t random, it is based on a formula described in the Immigration and Nationality Act (Section 203(c)) . Essentially is uses regional population data and previous immigration data to determine where the diversity visas should be apportioned -the goal being diversity. NOw, I have read tried to read the formula several times but each time I find myself falling asleep before I fully understand. It needed someone who was less likely to fall asleep and also prepared to go and research the population and immigration data. Luckily an insomniac hero appeared in the form of “DV4Roger”.

He used data from I pulled the data from dhs and census data  which are sources the government may use and he modeled their formula. First he presented how his estimates would have predicted the DV2014 outcome (with a known final global Consular Processing quota of 50770). The table below shows his numbers against the final CEAC extract. The result is impressively accurate. The biggest “miss” is for OC region but the relatively recently introduced E3 visa could be causing more AoS cases, so I think that miss can be explained. 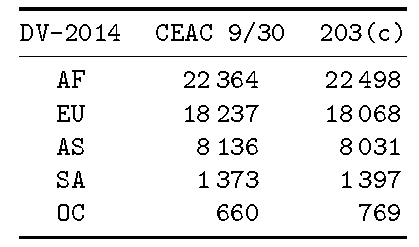 Next, DV4Roger applied his method to DV2015 using updated data. His estimates are shown below – the differences including the removal of Nigeria from the process. AS we can see his prediction is for a substantial increase for EU region, and a small increase for AS, SA and OC. AF would pay the price of these changes with a lower allocation – but again, Nigeria being out means the remaining AF countries actually have a small increase in visa availability per country. 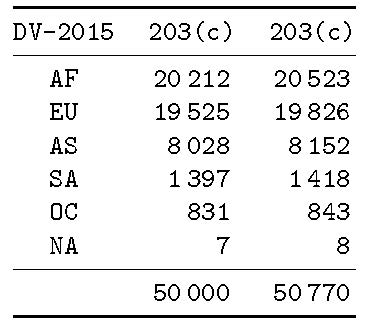 Many thanks to DV4Roger for sharing his information. I tend to believe these are an accurate indication and will allow us to predict VB movement, particularly during the last month or two of the year.

Note: DV4Roger has pointed out that there may be some mistakes in his numbers. So these numbers may be adjusted…