I wanted to update with my thoughts on what we are seeing from the CEAC data for Nepal.  People keep asking me when the cutoff will fall on Nepal and that cutoff point is critical for Asia as a whole. Let me explain my thoughts.

Currently the CEAC data shows 500 KDU selectees per 1000 case numbers. Not all of the KDU interviews will be Nepalese, but let’s assume they are (almost all will be). So at that rate there would 4000 Nepalese selectees by 8000. Whilst the data shows that Nepal is probably limited in the draw to a high case number of 9100 or so, getting 4000 selectees out of the 4991 selectees is possible because some of the original 4991 will not have responded – so it would make sense that the cases between 8000 and 9100 could have around 500/550 selectees.

OK – so out of the 4000, how many will be approved. DV2014 shows about 10% of Nepal embassy cases are refused, stay on AP or stay at ready. The ready ones at the end of the year are people who give up after submitting their DS260 or sometimes you will see derivatives connected to refused and AP cases (the principal is refused, but the derivatives stay at “Ready” – even though they cannot benefit from the case).

So – if 10% don’t get approved, theoretically the 4000 selectees could be sufficient to hit the limit. That is therefore “possible” by AS8000. At AS7500 it is NOT possible. So – if your number is less than AS7500, please don’t even bother asking whether you are safe or not. Above 7500 there is some risk, the risk increasing as the number gets higher. The final cutoff would be somewhere between 7600 (lowest) to around 8600 (highest). It is not possible to be more precise than that at this time – but of course the longer things go, the more accurate our guesses will be. Up to now I have been thinking the Nepal cutoff would be 8600 to 8800 – but looking at the data I think it could be earlier – so probably in the early 8XXX range.

I am ignoring AOS since that is very small for Nepal. I also note that Nepalese cases are largely not delayed by the DS260 processing – I think that is due to the agents in Nepal doing an efficient job of submitted the forms early in the year.

Now – what does that mean for Asia as a whole. Well, it could re-raise the possibility of a cutoff in August, which means “rest of Asia” would make progress in August and September. As I have explained before, the highest number for rest of Asia still depends on Iranian AP cases. The data shows that Iranians are still highly likely to be put on AP. Most of the Iranian cases are interviewed at Ankara, Abu Dhabi and Yerevan (look for AS region cases at ANK, ABD, YRV in the spreadsheet). It appears as though the AP timing is roughly the same as it was last year. To illustrate that statement take a look at the graph below. 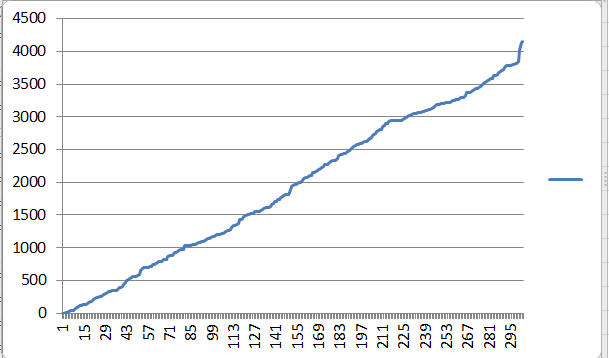 The increase of the number of AP cases among the three embassies processing Iranian cases is more or less linear. That suggests AP is lasting at least 4+ months, otherwise we would see less AP cases in the lower case numbers which would have (mostly) been interviewed earlier on in the year).

So – based on that data it seems likely that AP cases will be as slow to resolve as they were last year. That is bad news for Iranians who get put on AP late in the year, but good news for selectees from the rest of Asia. This would mean Nepal would take around 3500 of the AS quota (8500) and Iran would take something around 2000 to 2500 – leaving 2500+ for the rest of Asia. That should ensure the final AS number will be well above CN10000. It seems unlikely we will see a number as high as last year, but cases in the 10000 to 12000 range have a pretty good chance.